Here’s five great books you should read but you haven’t because you’re a gosh darn dick who doesn’t read. (Just kidding. If you’re here I bet you’re a badass.)

1. The Magicians, By Lev Grossman 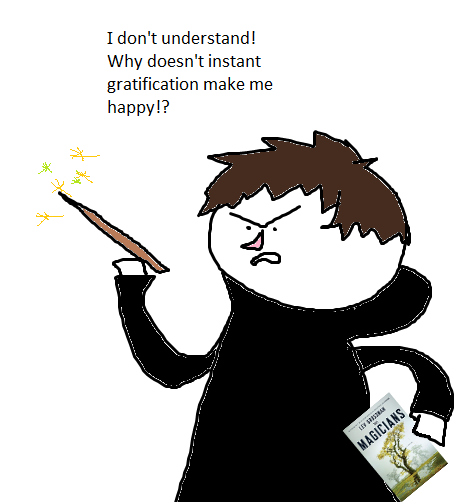 This book takes a protagonist raised on Harry Potter/Chronicles of Narnia-type books and sends him to magic college.

As it turns out, having God-like powers doesn’t make you happy. It just robs you of your ability to find meaning in simple things. It gave me a lot of sympathy for God (he’s probably depressed as shit – that’s why he doesn’t listen to your prayer-calls.)

Also, the main character has the same first name as me, which is pretty rare. So if you’re curious what my first name is, you can read this novel (or just read it’s synopsis on Amazon.)

Tips for Reading: Tear out the last four pages of the book. I’m goddamn serious. It completely betrays the tone and entire fucking point of the entire fucking novel in order to leave room for a sequel. Leave that shit to movies, Lev.

This is a tiny book with a great weight. Christopher Hitchens is best known as a well-spoken British dude who thought God was dumb and that women weren’t funny. A lot of people said they hoped he’d get cancer for hurting their feelings. Then he got cancer.

He continued to write and tour throughout the entire ordeal, culminating in Mortality. It’s rare to see such a poignant, balanced view of death from someone staring it in the in the face.

Tips for Reading: It’s tempting to plow through the book because it’s so short, but read one section at a time and let yourself process it.

3. The Name of the Wind, by Patrick Rothfuss

Remember how Lord of the Rings was so popular that every nerdy writer tried to copy it for fifty years, oversaturating the market with disposable shit that made everyone think fantasy was disposable bullshit instead of an interesting technique for exploring societal trends?

Well, I do, because I hate most fantasy books. Everytime I try to get through one I’m overwhelmed by the unoriginal world-building at the expensive of any meaningful character or plot development. Maybe some people get a kick from a 500 page lecture on dwarf economics, but I hate economics no matter how hairy it is.

The Name of the Wind sets out to dissect the fifty-year history of fantasy while simultaneously being a part of it. The result is like a glass of spring water after fifty years of high-fructose soda—refreshing.

Tips for Reading: Go slow. Even though it’s over 700 pages, the writing is actually very polished. Events feel like they’re supposed to be there, not tangents to show off how creative the author is.

9-11 (pronounced nein ellie-van) was a terrorist attack that happened in America. It was very sad, and completely changed the cultural zeitgeist. Unfortunately, one of these changes was our attitude towards people of middle-eastern descent (except Jesus, but that’s only because we pretend that he’s white.)

Persepolis is a great fucking reminder that people are just people, no matter how scary FoxNews tells you they are. When the little kids are goofing off in school, making fun of all the fundamentalist bullshit , it’s powerful because it’s obvious. It’s something I did. It’s something people all over the world did. Obedient fear is a learned behavior.

Tips for Reading: This is a graphic novel, so pay attention to the pictures. They’re adorable, but the composition is meaningful.

5. On Writing Well, by William Zinsser

I have to read a lot of academic writing at school, and I’m constantly amazed at how many people who’ve devoted their lives to literature can’t write a goddamn sentence. When I read this bloated, meaningless, ego-driven drivel of uninspired academia I want to beat every literary scholar over the head with this book.

It plays like a dark comedy—writers who favored simple, clean writing being analyzed by the willfully obtuse. Literary academia has burrowed so far up its own ass it thinks shit is complex.

On Writing Well reminds us that writing is about communication, not a contest to see who can pontificate in the most masturbatory manner.

If literary scholars are going to complain that no one reads, I must also complain that uninviting, self-indulgent, unpalatable writing does nothing to advance humanity’s relation to the novel, and in most cases actively corrodes it.

Tips for reading: Don’t be a scholar. Get this book and learn to write like a fucking human.